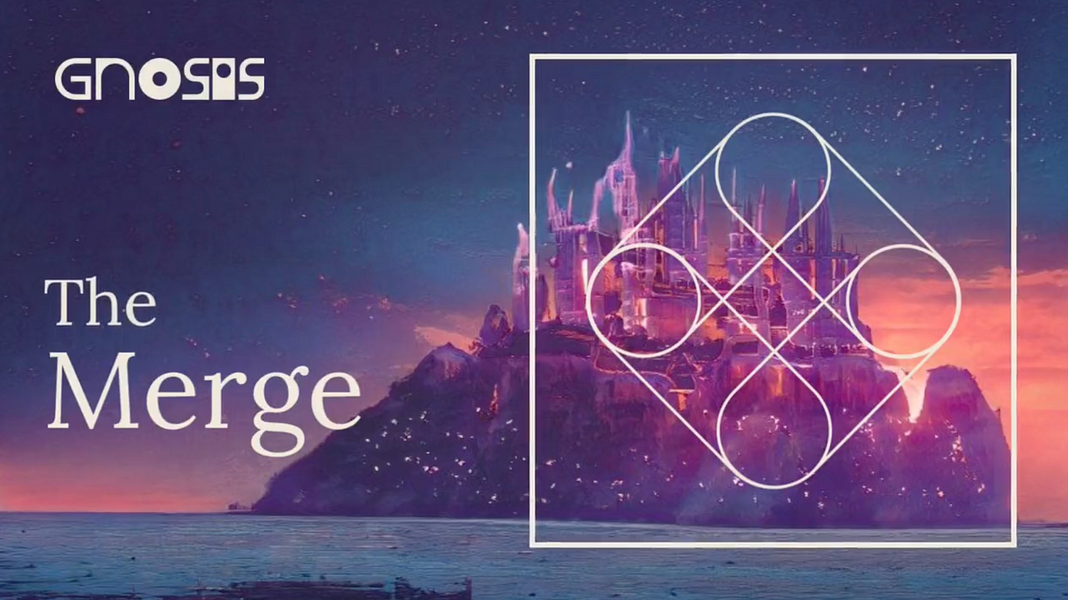 Gnosis Core Devs released dates this week for the much anticipated merge aiming for December 5th, 2022. The Merge is a significant shift for Gnosis, replacing the legacy PoA consensus with the open and non-permissioned Beacon Chain consensus. This allows Gnosis to transition to a fully decentralized and permissionless PoS network, mirroring Ethereum.

The Merge also brings Gnosis one step closer to achieving its goal of being the most credibly neutral network available. We believe that this is only possible if the network is secured by a geographically diverse community of validators around the world. With over 100K validators currently securing the Gnosis Beacon Chain, Gnosis is poised to offer a resilient, unstoppable network to the public. We’ve simplified the process of running a validator ~ only 1 GNO is required and the process is user-friendly.

If you’re already running a node and participating in consensus or you’d like to learn how, join us in the Gnosis Chain Discord.

Gnosis Chain 🦉 @gnosischain
The long haul is over. 🥁🥁🥁 In early December 2022, Gnosis will undergo the Merge!!! 🐼 The current Gnosis execution layer (formerly xDai) will merge with the Gnosis Beacon Chain, in a process similar to the Ethereum merge. Details below.👇

This week also kicked off the monthly Validator Meetup with Nethermind on the Gnosis Chain Discord. It’s a chance for validators to get to know each other, troubleshoot issues, and talk with the Nethermind team. The event has been added to the GnosisDAO calendar! See you there 😎

The GitPOAP team joined the DAOcast this week for a great discussion about on-chain reputation. Look out for highlights from the conversation between host T Wells and GitPOAP co-founder Colfax Shelby.

DappCon Berlin @dappcon_berlin
Hello frens! 🤓 We are happy that DappCon will take place again next year! 🤩😍🥳😎 We will share detailed information about the program and applications soon. Save the dates and join us! 🗓️September 11th -13th 2023 at Radialsystem Berlin.
5:06 PM ∙ Nov 17, 2022
55Likes11Retweets

Gnosis Builders @gnosisbuilders
The official xDAI faucet, GnosisFaucet, is now live!🚰 Getting started in @gnosischain just got easier. Follow the simple steps to claim $xDai enough for 100s of transactions. This makes onboarding for new users and developers free and easy. 💫 GnosisFaucet.com
3:26 AM ∙ Nov 15, 2022
46Likes10Retweets

We’re building the infrastructure for the open-internet. A resilient and credibly neutral network open to anyone without privilege or prejudice. Be a part of a team leading the web3 movement!

Otterscan is Live on Gnosis Chain 🦦

Willian Mitsuda - wmitsuda.eth (☕, ☕️) 🦇🔊 @wmitsuda
TLDR: @otterscan is working on @gnosischain 🎉 What do you need to do? Nothing! Just sync Gnosis Chain with latest @ErigonEth , point your current Otterscan instance to it and you're done! (1/n)
7:11 PM ∙ Nov 17, 2022
25Likes7Retweets

Our friends from bookmaker.XYZ have setup a massive competition for the World Cup in Qatar! If you want to try out pure smart-contract betting on @azuroprotocol - there’s no better time 🙂 They’ve promised to double the rewards for anyone registering from this page 👇

bookmaker.XYZ @bookmakerxyz
⚽️@bookmakerxyz World Cup 2022 - $50,000 Betting Competition ⚽️ You guys have been asking what we're doing for the #WorldCup2022 and we're officially announcing it now! Returning with our ever popular betting competition... But this time with a twist 🦾🦾 #GamblingTwitter
4:51 PM ∙ Nov 15, 2022
2,431Likes2,374Retweets

This proposal would fund Common Ground 5, the all-in-one communication & governance platform for DAOs & Communities. Built as a public good, Common Ground supports the onboarding of DAOs and web3 communities to the Gnosis Chain ecosystem.

Cheq Protocol- a modular, web3-aligned protocol that generalizes the escrow mechanism for freelancers, DAOs, eCommerce, and beyond. The team is asking for 50,000 DAI to support the development of the Cheq Protocol.

Chiado testnet is an important new part of the Gnosis ecosystem as a developer testnet. A reliable explorer is required for developers to be productive on Gnosis. A Blockscout instance should be set up as soon as possible to support Chiado now and into the future. This instance will rely on a dedicated node supported by Gateway. Gateway is already working with Chiado and can quickly spin up and support the required node infrastructure and RPC endpoint.

🏘 DAO of the Week: Warcamp

Warcamp DAO is the collective of web3 evangelists, tech & community developers that build and maintain the DAOhaus no-code DAO platform. DAOhaus operates as a public good service to allow anyone to quickly and easily create a DAO.

Warcamp operates in-line with the DAOhaus manifesto. The first line reads: “We envision a future where any community can achieve its goals while reinforcing the sovereignty of its members. We build technological and cultural tools empowering communities to coordinate.”

Under the hood, Warcamp uses the Moloch DAO contracts for DAO operations, taking advantage of its permissioned, nontransferrable membership shares and robust member protections. Learn more and get involved through DAOhaus.club

It’s been another quiet week in football, but bettors are still finding plenty of opportunities. Our pick of the week takes us down under for Syndey FC - Celtic. A very savvy bettor took advantage of a great opportunity on Double Chance, betting 100 xDAI on 1x at odds of 2.4. The result was a 248 xDAI win. Firm handshakes to him.

Come say hello in the Gnosis Chain Discord. Join us for the next GnosisDAO Community Call on the 10th of December 8th at 5PM CET, GnosisDAO Twitter Spaces.